Tanzanian artist, Diamond has decided not to leave his security to chance after storming bongo land, heavily-armed with guards.

This was on Monday afternoon, the 23rd of September 2019 when he arrived at Tanzania’s Kilimanjaro Hotel under tight security.

A move that left the hotel staff and other guests present, with jaws dropped.

Armed to the tooth, Chibu decided to arrive at the hotel with 11 well-built bodyguards – dressed in all-black – walking in a V-formation.

Nothing was new really. We’ve all come across such tight security right from presidents to celebrities, but this was the first by the Tanzanian artiste. Plus, he was home. 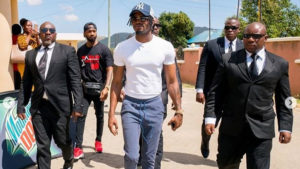 Diamond arriving at an event with his security detail, previously

Funny enough, one of the guests asked one of the hotel’s security guards: ‘Who is this young man?’

The entire drama played on until his exit from the 5 star hotel. How the guards surrounded his black SUV as he was leaving the premises, just adds to the gist.

Apparently, Tanasha’s fiance was at the hotel to sign a mega deal as a brand ambassador of a Chinese company. A deal that ranks as one of the major endorsement deals the artist has signed in history.

My son’s skin was very dry at birth: Rachel Ogola on her journey with...

US to Welcome over 34,000 New Citizens in Commemoration of Constitution Day and Citizenship...

Court rules hangovers are a disease