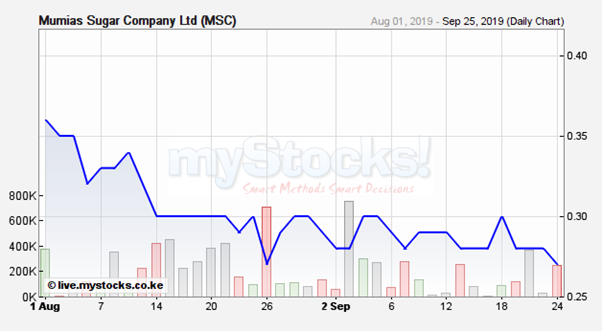 Shares for Mumias Sugar Company (MSC) Limited have been halted from trading today at the Nairobi Securities Exchange (NSE) following yesterday’s appointment of PVR as receiver managers by KCB bank. This marks the turning point of the listed sugarcane processing firm which has been on financial life-support from National Treasury.

Mumias Sugar Company becomes the third firm to be suspended from trading on grounds of insolvency after ARM Cement Plc and Deacons E.A Plc.

In its annual report, the firm blames this poor performance on reduced production throughput, higher impairment charges and tax adjustments.

Due to a decrease in locally produced sugar in the market and shortage  of  cane, Mumias Sugar Company’s Sugar sales prices dropped to Sh  66,979   per ton compared to KSh 81,329 per ton achieved last financial year,  ostensibly due to larger stocks of imported sugar.

Real trouble for Mumias Sugar first begun when its factory was shut down in mid-October 2017 for a whole five months due to lack of cane. While the cane processor was reopened 5 months later, it was again shut because of inadequate cane supply.

Analysts point to these interruptions, made worse by poor maintenance of plant and equipment, leading to low capacity utilization and entry of cheap sugar imports, for choking off Mumias Sugar.

The image above shows Mumias Share Prices have crumbled over the past few weeks. With the suspension, investors will now not be able to exit from the counter until trading resumes.

Trouble for the sugar miller has boiled over after it defaulted on payments of a KCB loan amounting to KSh 480 Million.

It is a race against time for broke Mumias Sugar Company to either shape up or ship out. Analysts maintain that the cane process may not survive the flood of competition when sugar import safeguards are lifted.

Kenya’s inefficient sugar market is currently protected by safeguards against any duty-free imports from the Common Market for Eastern and Southern Africa (COMESA).

Following the launch of the Free Trade Area on October 31, 2000 by members of COMESA, Kenya expressed concern that her sugar sector was not able to compete against those from other member countries.

The Government then applied for protection of the sector by way of a safeguard under Article 61 of the COMESA Treaty so that sugar exports from the common market to Kenya are subject to customs duties.

The safeguard was implemented in March 2002 for an initial period of 12 months and subsequently renewed by the Council of Ministers.  Subsequent extensions have been done five times, with the last one lasting a year from February 2014 to February 2015. It has further been extended.

As matters stand, the privatisation of State-owned sugar mills has stalled as the clock ticks towards the end of yet another extension.  While the future of Kenya’s sugar industry hangs in the balance, some players appear unperturbed by grim prospects if the COMESA safeguards are lifted.

This article has been updated

TSC conditions 10,000 internship applicants must fulfill to be hired

BBI is a deal between two people